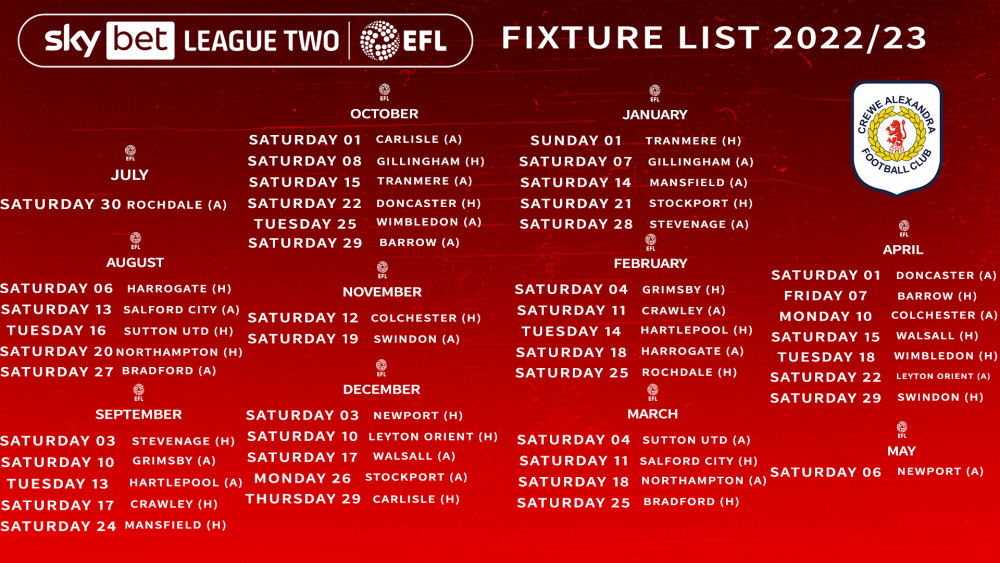 CREWE Alex face two first-time clashes in the first month of the 2022/23 season after the EFL revealed fixture lists today.

The Railwaymen host Harrogate in their first home game of the campaign on Saturday, August 6.

Like the clash with Sutton United, who are the visitors to South Cheshire on Tuesday, August 16, it will be the first time that the clubs have met in competitive action.

The EFL season kicks off early on Saturday, July 30 when the Alex travel to Rochdale.

Local clashes at Tranmere on October 15 and a Boxing Day visit to Edgeley Park - where the Alex will meet newly-promoted Stockport for the first time in 11 years - stand out.

The Carabao draw has paired the Alex with League Two newcomers Grimsby Town, with the first round tie scheduled for the week starting August 9.

Crewe face games against Bolton, Tranmere and Leeds Under-21s in Group B of the Papa John's.

Meanwhile, the club says it has reached an agreement with out-of-favour midfielder Madger Gomes, who will leave the Mornflake Stadium after his contract was cancelled.